My First Week as an Auxiliar de Conversación

I have been waiting for this moment ever since I got accepted into the program.

It’s been months of lengthy preparation, from the visa requirements up to the actual trip and stay, here in Madrid. There was a point when I thought I would never make it, but my heart was telling me otherwise. And so, here I am!

The first time I visited the school was on a Sunday. Of course, there was no one around, but I just wanted to familiarize myself with the location to avoid being late on the actual day itself. The bus ride was short but my anxiety was killing me softly because I was heading to unfamiliar surroundings, and I was the only person left on the bus. Luckily, the driver was very nice and helped me with the direction. When I finally saw my school after an 8-minute walk, I heaved a sigh of relief and thank God profusely! My fears of walking through a path of unsafety vanished. The school was a sight to see, and I looked forward to seeing it with the students, two days after. 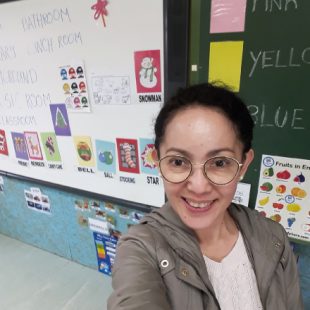 I walked through the gates with all of these students going back and forth, waving goodbye to their parents.

My thoughts were focused on only one thing: I am here to help these kids and the teachers, and I will do my best. I know there will be trials along the way, but it is always part of anything you do in life. So, I’m ready to take the plunge.

I met the coordinator, Tomás Río, immediately after I got into the school. Together with the other American Auxiliar, Tomás gave us our schedules. Based on my interests and my zero experience in teaching, he assigned me to the first and second grades. I was very happy because I got my wish! I like working with very small kids.

Tomás showed me the classroom where I met Sonia, the second grade teacher. She informed me that I could stay with her for the whole week to get the feel of the teaching environment and get used to the entire process. She understood how I felt since she was exactly in the same position as I was when she practiced teaching in London years ago. When I saw the students, I was overwhelmed with the warm show of affection towards their teacher. It was different from the way we were back home. We were very formal and always kept our distance, not because they were strict, but it was how we were trained to do it. This was something very new to me, and I found it very refreshing!

Sonia introduced me to this lovely group of 20 kids.

It’s funny because the kids didn’t have the slightest inkling that the adult in front of them was quite nervous to meet them. However, their warmth made me feel at ease. I told myself that they were a bunch of six and seven-year-olds, so RELAX! Sonia told them that I didn’t speak and understand Spanish and they had to talk to me in English. They kept on looking at me, smiled, said hi and hello, and there were attempted small conversations in English. There was one student who whispered to me that his father was an English professor. A few days after, another student told Sonia that his parents have a Filipino friend – because I am from the Philippines.

The students were aware of my presence in their class, but I think it’s the fact that they had to talk to me in English that made them hesitant to approach me sometimes. There were two students, though, who were very good in English because they had the opportunity to live in the United States and Canada for two years. Some students tried their very best to talk to me even if they struggled for the right words to say. Some were just hanging around, listening.

After two days, I proceeded to the first graders, and I was in for a big surprise!

They were the exact opposite of Sonia’s second graders. The classroom was a chaos. Students were everywhere and the teacher was shouting. They were running around, some were on the floor, some were in the toilet, some were fighting at each other, some were crying, and some were playing with the teacher’s things. My throat went dry. The kids were in transition from the pre-school to first grade. They were still in the playful stage. When they finally calmed down, Lilli, the teacher, introduced me to them. Once again, a bunch of five to six-year-old kids looked at me with a hint of innocence and suggested naughtiness. What could they possibly be thinking? Unlike the second graders, I knew that these kids were going to test me and see what they could get out of me.

Was I their friend or their enemy?

The thought amused me but proved me right. They touched my shoes, hair, clothes, and tried to mess up with me, and I played on with firmness. Fortunately, I am blessed with so much patience that they can test with all their might. I remember a male student who went up to me with his arms crossed and directly asked me in Spanish, “¿Cómo te llamas?”. I told him in my most gentle yet firm voice, “You have to speak to me in English because I don’t understand you.”. He was one of the naughtiest in the classroom, but I did not give in to his test. After a minute, he left. That boy now waves at me and calls my name each time he sees me. Together with the rest of the kids, he probably reached the verdict that I am their friend.

The bus ride was another thing. I had a lot of bloopers. I was in and out of the busses and running from one bus stop to another. My landlady even ran with me in her house clothes just to make sure I got on the right bus. It was hilariously funny!

Looking back at my first week as an Auxiliar, I would say that experience is indeed the best teacher. After three months of getting to know the school, the students, the teachers, and the transport system, and getting used to the language and culture, I think that my Auxiliar experience is building up fast, and I look forward to spending six more months with these wonderful kids.

0 responses on "My First Week as an Auxiliar de Conversación"