My First Month in Madrid – 10 Things I Learned

It seems only yesterday when I set foot in Spain. How time flies! Looking back, I could not believe that I made it through. Traveling to a country where you don’t speak the language and you don’t know anybody is a bit scary.

I held on to my faith that everything would turn out fine, and it did.

My first month in Madrid was a real challenge. It was the familiarization of absolutely everything that I was new to and getting used to the people around me, the environment, the weather, and my tasks as an Auxiliar de Conversación. It was a learning experience, and it still is up to this moment. 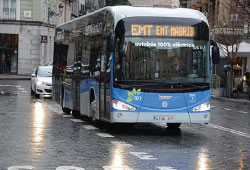 I am amazed as to how well-connected the trains, subways, and buses here are. I got a little worried at first when I learned of my school assignment in Colmenarejo, but it should have been the least of my worries. There are buses every 15 minutes from where I live in Galapagar going to the school, and Moncloa where I take the metro going to Madrid center.

On weekends, buses run every hour. The mode of payment for the fare is also very convenient. If you are a frequent traveler to Madrid, then it’s best to get a monthly abono card that coincides with your zone area.

This will cover the whole transport system in Madrid. If you are less of a traveler, then there’s the ten trip journey card.

It is a fact that Spain ruled my country for 333 years, so we have similar words but I didn’t know that it was this much. I was astonished when I heard people saying familiar words. Back home, I knew that numbers and days of the week were the same, but I was surprised to learn that things in the kitchen and the house – among others – or even a few expressions were similar too!

Spanish is a language that I have always wanted to learn, and knowing the similarities intensifies my desire for learning more.

I learned that Spaniards have two surnames. This got me confused at first, but the explanation is pretty simple. They get their first surname from their father and the second surname from their mother. They use both surnames in their identifications and in filling out forms.

When they get married, they still use these surnames but have the option of adding de (which means “of”) after the surnames.

Spain is known for its hearty meal and an array of wine and cerveza. They love paella, chorizo, beans, and jamón. They also have this stew called, cocido madrileño where all of the ingredients are boiled. I extremely liked it!

Of course, their meal is not complete without pan (bread!). Read the following post to discover the best Spanish dishes to try in Madrid.

This is not entirely new to me because we have it back home but the difference is the length of time. Ours is only a couple of minutes but here, it goes from a few minutes to an hour or more!

I got a taste of this when I went to a store to buy something and it was closed. I forgot that it was siesta time. Well, I think that it is a contributing factor to why Spaniards live long.

I have experienced this the first time I arrived in Madrid. The Cabify driver took me to the address that I had given and helped me with my luggage, but I wasn’t sure which building I was supposed to go to. I could not contact the homeowner because I lost the country’s roaming partner.

I went up and down the hill with two pieces of luggage for more than an hour. Also, I asked several people who pointed me to the wrong apartments until a kind woman in her 40s helped me with my luggage. She probably saw how exhausted I was and asked me to wait in an area while she went around looking for the apartment. She took me there and I thanked her tremendously.

Another incident was when I went to school for the first time on a Sunday. When I went down the bus, I thought I was in the middle of nowhere.

There were no people around, just the cows and horses. The bus driver parked under the tree since there were no passengers. I went back to her and asked her the exact location of my school.

After locating my school, I went back to the bus which was fortunately still there. She told me it wasn’t time for her to leave yet and that I could take another bus, but I refused because I was too afraid. So we talked until it was time to go.

I gave her my fare, but she did not accept it. She said it was her welcome gift to me. Wow! I was so touched. Her name was Sonia.

Yes, they are! I spent only 50 to 60 euros a month for my food and daily necessities excluding the 4 Sundays I spent eating out in Madrid. That’s my break from cooking my meals at home. As for the fruits and veggies, I spent four to five euros from a fruit store for a week’s supply.

There are many kinds of apples and oranges but I usually choose the ones that are less than a euro. Eating out in Madrid is also cheap. Many restaurants and bars serve food for less than five euros.

8. Chivalry is not lost in Spain:

Other countries may have lost it, but here in Spain, it is very much alive. I have witnessed such acts of chivalry many times at the metro and church. Younger people would offer their seats to the elderly. I saw this young lady offering her hand to an older man who was about to go out of the metro.

Spaniards of all ages are very warm. When I come in close contact with people on the streets, stores, buses, or anywhere, they would always greet you with ¡Hola! or ¡Buenas!

This made me feel welcomed in the school in my first few weeks because everyone greeted me with a smile on their face. It can be overwhelming at times!

Eating late breakfast and lunch is fine with me, but dinner at 10 pm is different. Whenever I have my dinner at 7 pm, my housemates (landlady and another renter), would always say that it’s too early to have dinner. Well, sorry but I need to have mine early.

My stomach is already complaining. For the Spaniards, eating at 7 pm is still a merienda-cena.