What are Your Favorite Landmarks in Spain?

I have been living in Spain for almost two years now. And I have had the chance to visit someplace before COVID-19 hits. I really enjoy visiting those Spanish landmarks, and I would like to share my favorites.

Before I became an Auxiliar de Conversación with ConversaSpain, I had ventured only to Spain on two short holidays. We visited the Sagrada Familia and saw a few sculptures by Gaudí in Barcelona city. Neither time however did we stay for long or have the time to explore either of these.

When I started working as an Auxiliar, I had visited two landmark monuments of Spanish history, popular for tourism. These were The Roman Theater of the Murcia Region (in Cartagena where I live now) and The Alhambra in Granada. Let me elaborate on them.

The Roman Theater of Cartagena 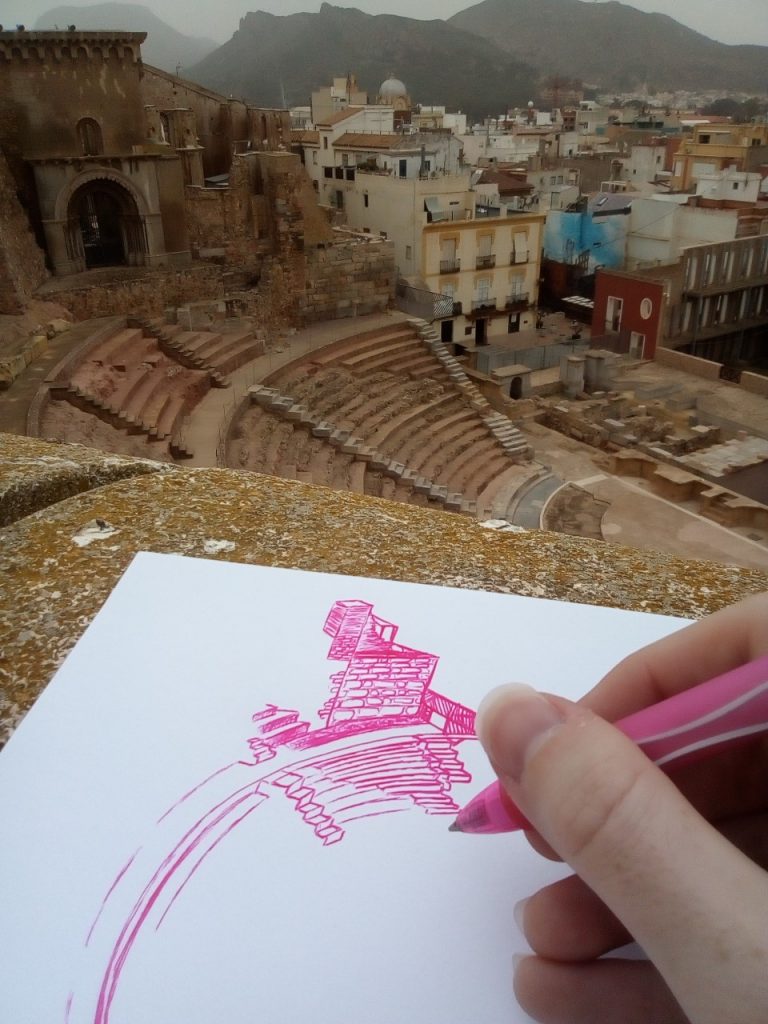 The historical monument I live closest to is the Roman Theater in Cartagena city. I visited this monument for the first time with my two fellow Auxiliares from the United States. They were both knowledgeable in history. So, they explained to me the history of the Roman Emperor’s of the time and their connections to Cartagena city.
The Roman Theater of Cartagena is located in the south of the Region of Murcia, positioned against Cartagena’s coast. The theater is an ancient stadium much like the Colosseum of Rome. It was built by the same country, the same lineage. Its wide-open stands bask like an opened flower in the unending sunlight of the South of Europe.

It stands tall, yet concealed in a stone crater, visually submerged from the Spanish ocean and promenade within reach of its grasp. It is a historical marvel, but carefully maintained though much of the once vast stone stage has eroded through the passage of time.
Likewise, there is another theater in Cádiz, on the other side of the country. Its stage remains intact, unswallowed by the passage of time.

The City of Cartagena is also a must-visit place if you are already in the Roman Theater. The most affluent and tourist-friendly area is Calle Carmen, the heartbeat of culture, personality, and commerce. I recommend walking through the streets and illustrate the endless historical buildings available to the eye. Also, the Casa Pedreño building in Calle Carmen is a treasure trove of ecstatic unblemished detail, rich and full of exuberant texture.

The Alhambra in Granada 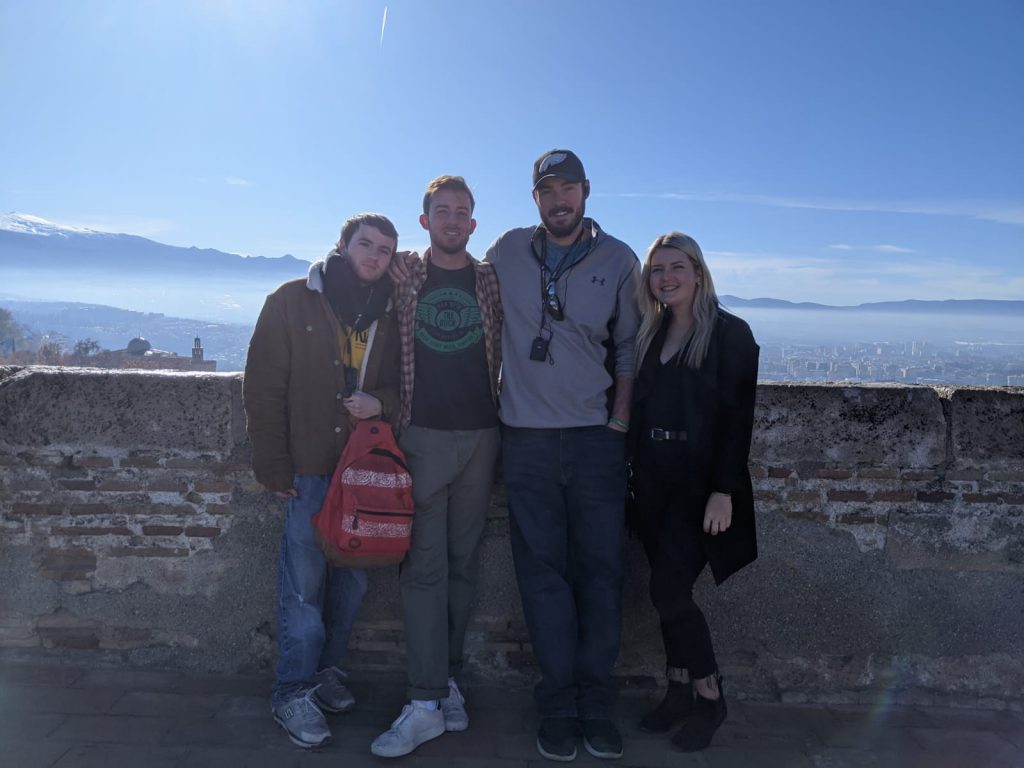 The Alhambra is an ancient Arabic structure in the sweltering city of Granada. Across every corridor, Arabic lettering is strewn, taking up all inches of every floor and ceiling. A complex array of details entails all catacombs as far as the eye can see. It remains one of the last bastions, the last Arabic outposts of what was once a herculean Arabic Empire. It is forbidden to depict the human form on the hallowed walls of the temple thus all but letters remain. The stone masonry is restless, tireless, witness to us truly indefatigable.

An exhaustive travail up the hill in the freezing winter of November will reward visitors with a sumptuous tour of this famous elusive Arabic temple. Its history fully on display in the endless text upon its walls yet affluent meandering meanings are so mysterious, bathed in forgotten history.
We received an audio device each from the tour guide and circled part of the colossal structure before entering. Through the halls, we waltzed through marble-floored corridors awash with succulent vermilion gemstone passageways. Cobalt indigo plateaus of hardened stones surround passers within these ageless living routes that eternally survive the test of time. Bathed in heated sunlight even in winter, there are indigo hues awash across the sandstone palace Chronos couldn’t snare.

Everywhere one looks, upon the floors or the ceiling, there are endless Arabic characters carved. To us foreign guests, the vernacular forgotten spoke to us in amazing irrepressible and exhaustive detail and the castle was shaped by leisure, spirituality, socialization, politics, aristocracy, religion, and protective fortification.
It is so truly different from any and all other structures and landmarks I have had the pleasure of visiting in this wonderful country. The culture clash of Spanish architecture and Arabic is stark and so ominous. Religion and worship fundamentally separate the visuals of their structures. The Christian and Arabic ideals formulate the temples around them and their daily routines. Every detail is carefully situated around the daily life of each individual, from contemplative worship to basking in the pools of the central plaza amongst the exotic birds and plentiful fauna. 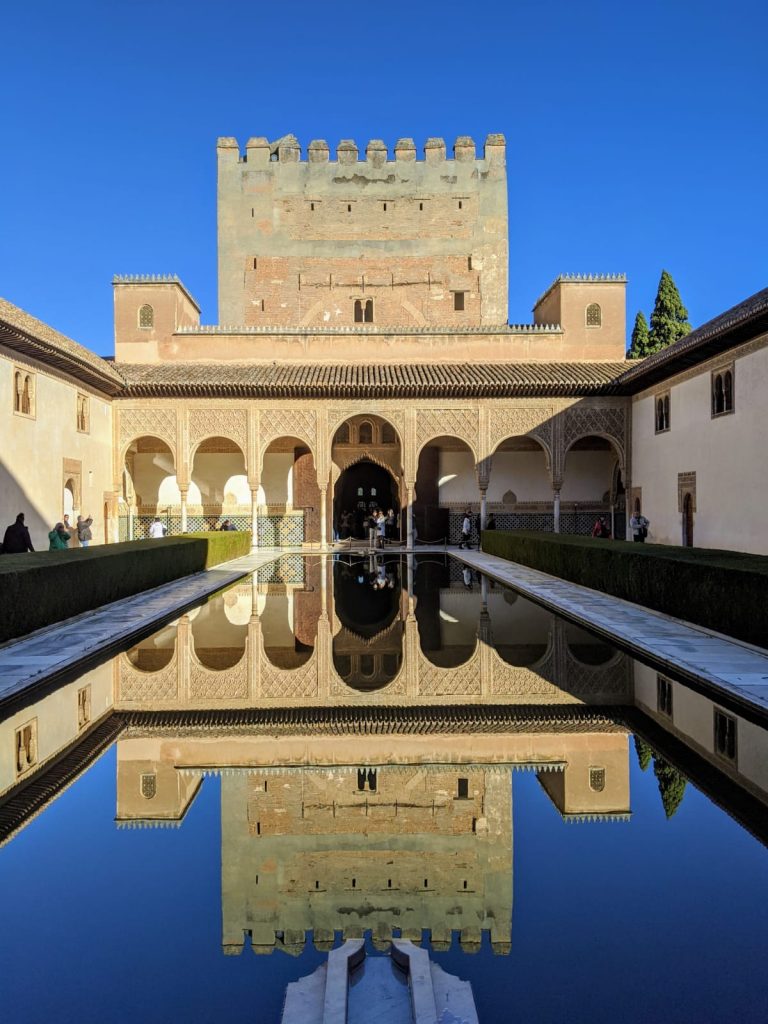 Untouched by the time, the central pool is silent with pristine water. The entire edifice is reflected upside-down in the sprawling blue reservoir, a testament to its untouched majesty. All sides are flanked by gorgeous meticulously stone-carved Arabic walls so rich in detail its epitaph can only be seen but up close, naught afar.
Even in the shivering tepid atmosphere of winter, the eternal Spanish sunshine bore through basking the beautiful lake in freezing warm air. The cask of the plaza has an open ceiling to bestow through the sunlight to colourize and establish the wondrous archaic atmosphere of this epoch of the Alhambra.
The vast valiant wall casts an eternal spiritual echo in the water, its unknowable reflection bequeathed to another world in the sea. So articulate are the parallax of details, that it is unseeable at a fleeting distance. This space, to the Arabic rulers, was truly the greatest of jewels that survived alone in Granada, the little Pomegranate treasure of the Iberian Peninsula. Hundreds of years ago, this pool housed all manner of exotic creatures such as pink flamingos and pure white swans as depicted in the painting A Court in the Alhambra at the Time of the Moors, by Edwin Lord Weeks in 1876.

The Arabesque Halls of Time 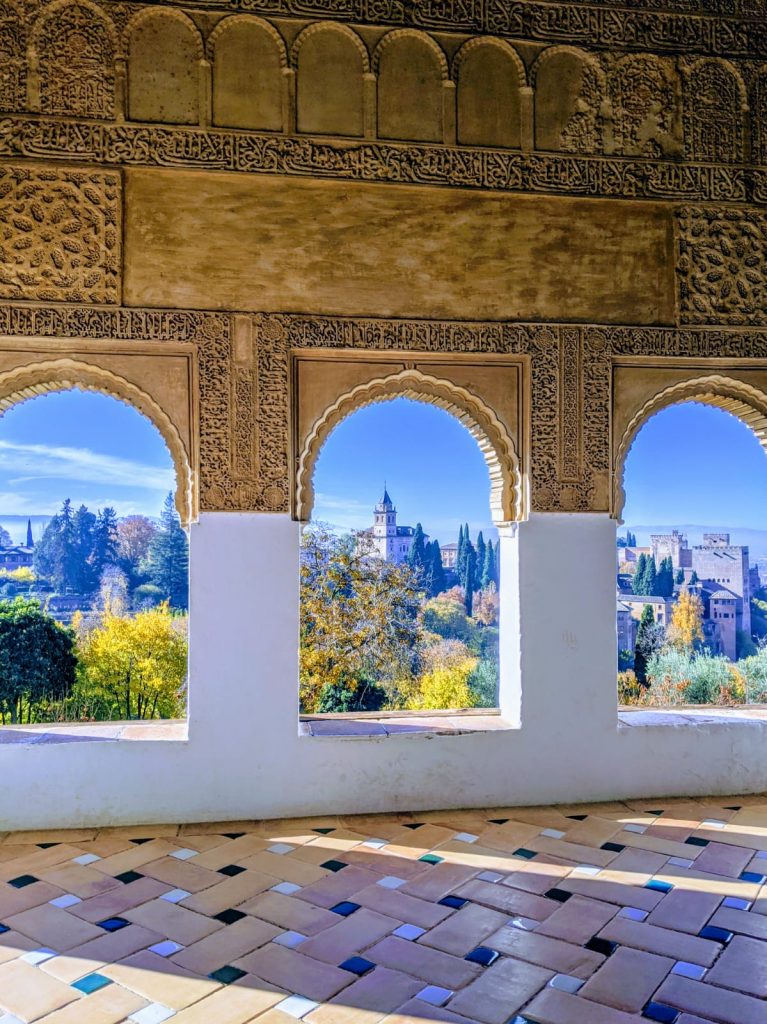 Through the windows of every hall, we see out to the gorgeous mountaintop scenery of the vertigo heights of Granada’s central city. Heights that once, so very long ago challenged the might of any and all invaders. Spanish or otherwise to tackle the home of the nobles of this ancient palace. It is a truly splendorous yet attack-minded castle, built to honor and awe inspire yet rigid to defend from all opposers from the very country it inhabits.

The difference of this structure is so loud to all Spanish monuments I have visited. It is a vast and spectacularly alien culture clash exhibit to the ages of Spanish dynasties that abound. If not preserved, would this affluent palace be forgetfully dismayed and admonished? It remains here aloft, as a fascinating conundrum of the art of war opposed to the crucial preservation of dynastic history.
Truly the Spanish, when they overcame the Arab empire, would desire to tear down the symbols of a foreign authority, these kingdoms within their country’s homeland. But luckily, here this wondrous architectural peculiarity remains in the country it sought to invade.

These are the two greatest monuments I have visited in Spain. The visits to the Roman Theater and the Alhambra were mesmerizing journeys throughout the winters of Spain bathed in the cold. Both are unforgettable landmarks of Spain: so different, yet peculiarly built not by Spaniards but by outsiders such as the Romans and the Moors.
They have been carefully maintained and are beacons for tourism, showing how architectural icons that are inherently foreign to Spain can yet attract people to these Iberian lands. They both represent the diversity of Spains’ history and the diversity its central position attains, sandwiched between the Roman Empire and Morocco. There really is nowhere else on Earth like this.

0 responses on "What are Your Favorite Landmarks in Spain?"